This setting controls how much memory can be used by the SQL Server Buffer Pool. If you don’t set an upper limit for this value, other parts of SQL Server, and the operating system can be starved for memory, which can cause instability and performance problems. It is even more important to set this correctly if you have “Lock Pages in Memory” enabled for the SQL Server service account (which I always do for x64 systems with more than 4GB of memory).

These settings are for x64, on a dedicated database server, only running the DB engine, (which is the ideal situation).

If you are running other SQL Server components, such as SSIS or Full Text Search, you will want to allocate less memory for the SQL Server Buffer Pool. You also want to pay close attention to how much memory is still available in Task Manager. This is how much RAM should be available in Task Manager while you are under load (on Windows Server 2003):

You can use T-SQL to set your MaxServerMemory setting. The sample below sets it to 3500, which is the equivalent of 3.5GB. This setting is dynamic in SQL Server 2005/2008, which means that you can change it and it goes into effect immediately, without restarting SQL Server.

You can also change this setting in the SSMS GUI, as you see below: 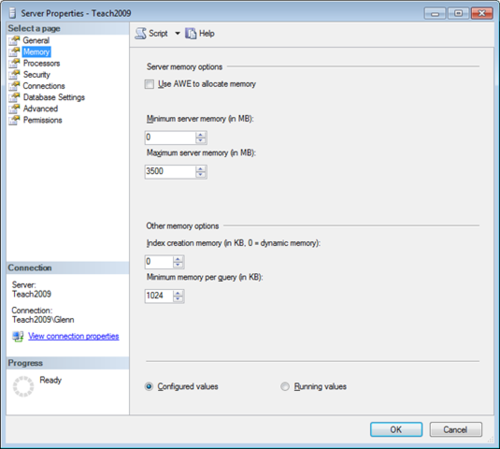 Finally, I have learned that it is a good idea to temporarily adjust your MaxServerMemory setting downward by a few GB if you know you will be doing a large file copy on your database server (such as copying a large database backup file).